For @U20Rugby, a preview of New Zealand’s squad for the upcoming World Championship: https://t.co/MpjBjjQZgp

For @U20Rugby, a brief look at the first New Zealand U20 development squad named ahead of the 2018 season: https://t.co/qhIdADwLT3

For @U20Rugby, a preview of New Zealand U20 – Ireland’s pool stage opponents in the upcoming World Championship: https://t.co/s1hbeXqFe7

A brief summary of the New Zealand squad for the Oceania U20 Championship at @U20Rugby:https://t.co/k7uM0ZG91E 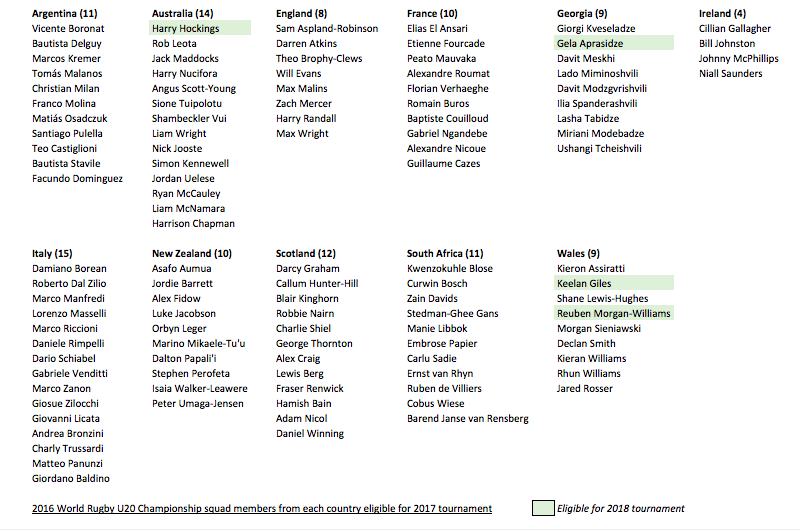 The number of players in each squad from this year’s World Rugby U20 Championship eligible for the 2017 tournament. Notable: Australia, New Zealand, South Africa and Argentina could all return at least ten members of their 2016 squads, while finalists England and Ireland have the lowest number of potential returning players with eight and four respectively.

Tomorrow evening at the Manchester City Academy Stadium, Ireland will contest the semi-final of the World Rugby U20 Championship against Argentina. The Pool C winners claimed impressive victories over France and South Africa in the group stages, and will be looking to emulate the success of their senior counterparts in last autumn’s Rugby World Cup quarter-final.

END_OF_DOCUMENT_TOKEN_TO_BE_REPLACED

The World Rugby U20 Championship begins in Manchester on Tuesday evening, and New Zealand – one of Ireland’s opponents in Pool A – are being backed by many to retain their title. This year’s Baby Blacks squad is slightly younger and less experienced than the 2015 side, but the high level of talent from 1 to 15 ensures that they will be in the running for the trophy when the tournament reaches its final stages in just under three weeks’ time.