Portrayals of Northern and Southern Hemisphere rugby are typically contrasting: the latter marked by ball movement, skill and attacking invention, and the former tightly contested and brutally physical. The pre-eminence of Australia, New Zealand and South Africa for much of the professional era often meant that this contrast of style was also framed as a contrast of quality, and that its natural consequence was the rest of the rugby world falling into step with such an approach to the game. This pre-eminence, however, has faltered for both sporting and economic reasons, and with it the notion that style is a necessary prerequisite of substantive performance in international rugby. In the wake of the 2015 World Cup, the home nations in particular have been resurgent, and their success has been a result of honing traditional strengths: ball retention, breakdown work, defence and tactical kicking. On top of these foundations, individual skill levels have improved as a result of sustained exposure to a high level of coaching and a focus on all-round player development at all levels.

These increased skill levels have undoubtedly had a positive effect on the quality of attacking play in European rugby, and at international level both Wales and Scotland in particular have expressed publicly a desire to ‘modernise’ and change the way they look to play with ball in hand. Nevertheless, an examination of the Six Nations in comparison to other competitions during this World Cup cycle – as will be seen below – suggests that such deeply entrenched stylistic differences have sustained, and that higher skill levels are being applied within a markedly difference game structure to the international game in the Southern Hemisphere. This has important implications for test match rugby in the long-term: looking further ahead into the future of the international game, the apparently inevitable movement towards Northern economic and on-field dominance will have a clear effect on the nature of the on-field product. However, this also raises interesting questions in the context of the 2018 Six Nations championship, which begins on Saturday 3rd February: in particular, whether changes to breakdown laws will negate any such attempts and push Northern Hemisphere rugby even further down its current path, or the attacking ‘philosophy’ espoused by Gregor Townsend will result in Scotland truly departing from the European model.

END_OF_DOCUMENT_TOKEN_TO_BE_REPLACED 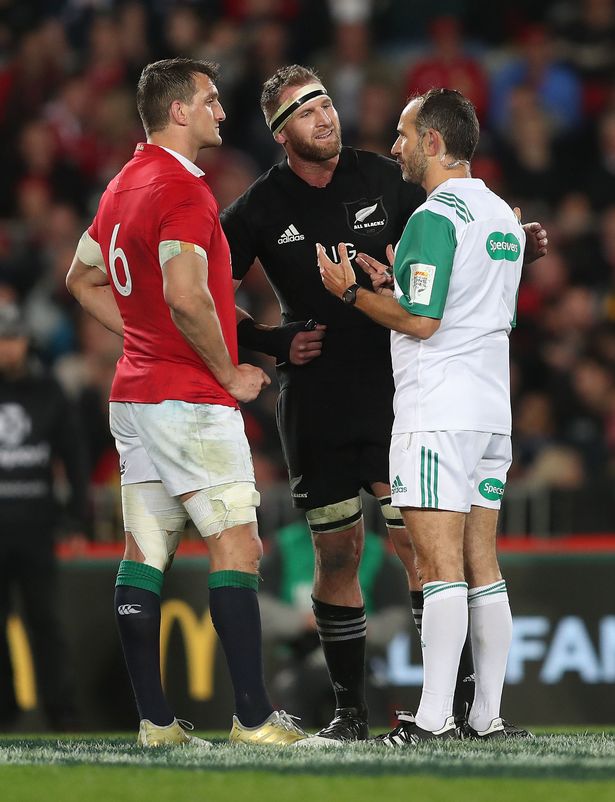 Listen to the noise of the crowd at two pivotal moments of the 2017 Lions series, and the impression is striking.

Kyle Sinckler leaps into the tackle of Charlie Faumuina in the 77th minute of the second test, and without delay the left arm of Jérôme Garcès shoots into the Wellington sky. A roar of approval rises from the thousands of Lions fans on their quadrennial pilgrimage, matched and emulated only by that which follows Owen Farrell’s successful conversion of the resulting penalty kick.

Likewise, as Beauden Barrett kicks off in the final minutes of the deciding test and Kieran Read times his run and jump to perfection, it is their inimitable rallying cry that resounds at Eden Park. After Ken Owens’ catch in an offside position, Romain Poite reacts as swiftly as his compatriot at the Westpac Stadium – and it is the turn of the locals in the crowd to spring to their feet. After confirming his decision with TMO George Ayoub and relaying to the captains that Read’s leap has been adjudged a fair challenge in the air, Poite walks calmly towards the spot of the penalty until an interjection from Garcès himself – the assistant referee on the far side of the field, and the only official not involved in the previous consultation. “Oui, Jérôme” – this is all that is heard on the referee’s microphone for a period of around thirty seconds, at which point Poite informs Warburton and Read that in fact Owens’ actions did not constitute a deliberate attempt to play the ball. Kiwi boos and British & Irish cheers cancel each other out in equal measure, and the rest is history.

END_OF_DOCUMENT_TOKEN_TO_BE_REPLACED

The analysis of international rugby is laden with danger. Fixtures are infrequent (on average, Tier 1 nations have played fewer than 12 games per season across 2016 and 2017), yet the traditional depiction of test matches – imbued with a deep emotional resonance – lends itself to the inference of significant meaning from single data points. A loss by New Zealand in a test match is attributed with significance that a loss by Saracens in a Premiership game is not, because of the sparsely populated environment in which it stands. For another data point on a club or franchise, it may only be necessary to wait another seven days; months can pass between internationals. The degree of light which a single game can shed on the underlying abilities of the respective teams is the same in each scenario, but the difference in the first case is that an additional data point to confirm or deny a suspected trend is usually not far away; analysis can be measured and sceptical, knowing that in a short time a little more information will become available, rather than conclusive and emphatic.

Two years into a World Cup cycle there is sufficient information available to review the performance of each team, with Tier 1 nations having played between 20 and 29 test matches each. What follows is an attempt to establish not only which teams have been successful, but also the tactical approach which they have employed in order to be successful.

END_OF_DOCUMENT_TOKEN_TO_BE_REPLACED

For @U20Rugby, a brief look at the first New Zealand U20 development squad named ahead of the 2018 season: https://t.co/qhIdADwLT3

For @U20Rugby, a breakdown of the 2017 New Zealand Secondary Schools squad: https://t.co/McgWHCyI0t

New Zealand’s national U19 tournament kicks off in Taupō tomorrow – a summary of the players involved for @U20Rugby: https://t.co/3ecS2F6zi8

The Lions’ Saturday team has produced two dominant defensive performances against the Crusaders and the New Zealand Maori, but will face their greatest challenge in Eden Park on Saturday. What can we learn about this contest from the Crusaders’ lack of success with ball in hand in Christchurch, and the All Blacks’ attacking dominance against Samoa?