Saturday’s epic World Cup semi-final between England and New Zealand did not want for defining moments, but the tackle of Sam Underhill on Kieran Read – technically superlative, physically dominant – which sent the All Blacks’ captain into reverse in the 56th minute felt particularly symbolic. It is easy to construct a compelling narrative around such a moment: the world champions set up in the attacking shape which had given them so much success with ball in hand in the tournament to date, but their talisman was floored by his younger counterpart in the blink of an eye.

In many ways, it seems a fitting end to this entire World Cup cycle for New Zealand, with its emotionally salient moments to this point – at least to observers and advocates of Northern Hemisphere rugby – being a 2016 loss to Ireland in Chicago, a drawn series against the Lions in 2017 and a 2018 loss to Ireland in Dublin. All are new experiences for the Kiwi side in the professional era, and all contribute to a framing of this as a period in which “the chasing pack has reeled them in“.

Indeed, it is hard to argue that the 2016-19 period has not seen a marked improvement in the fortunes of European sides against the All Blacks from the tribulations of the last few cycles: the traditional Five Nations (with the Lions included) managed a record of 4 wins, 1 draw and 14 defeats, their best performance since the 2000-03 period (3-1-13). The three cycles in between saw these nations claim only 3 victories – one in each 4-year period – across 63 encounters.

In terms of results against traditional Tri Nations opposition Australia and South Africa, the story is not quite as clear-cut. Not a single 4-year World Cup cycle has passed in the professional era without New Zealand losing to both nations, and the 2016-19 period was no different; however, their overall win percentage of 78.9% against these countries was their second-highest rate in the professional era. (This cycle – in which they had a W-D-L record of 15-1-3 – has been bettered only in the 2012-2015 period, when they recorded a record of 16-2-2.)

As a consequence of this, the All Blacks’ overall winning percentage over the last 4 years – while representing a clear downturn from the unprecedented heights of the 2015 cycle – is far from an outlier in the professional era. Wins in 76.3% of tests against Five Nations and Tri Nations opposition ranks as only their third-worst cycle of the 6 to date, comfortably ahead of both the 1996-99 (70.6%) and 2000-03 (71.4%) periods.

Look past simple winning percentage, and the narrative is complicated further. The current All Blacks team can be thrilling to watch with ball in hand, and this attacking prowess resulted in 39.5% of all games against Five Nations and Tri Nations opposition being won by a margin of 20 points or greater. This is a significant improvement from the 2015 cycle, where 25.6% of games were won by such a margin, and is the highest of any of the 6 professional cycles to date.

While it is notable that in comparison to the 2012-2015 period the proportion of wins by 20 or more points against Five Nations sides dropped from 36.8% to 26.3%, this is the continuation of a downward trend that began after the 2007 cycle. (In the four-year period leading up to that World Cup, New Zealand won 57.1% of these fixtures by this margin; in the 2011 cycle, this figure stood at 47.6%.)

In contrast, their proportion of games won by 20 or more points against Australia and South Africa exploded from 15.0% in the previous cycle to 52.6% in the current period. However, these wins were heavily skewed towards the beginning of the cycle, with 7 of the 10 coming in 2016 and 2017; as South Africa in particular began to get their act together in 2018 and 2019, the proportion of games won by this margin fell to 25.0%.

Interestingly, these divergent trends – an increase in the proportion of games won by a significant margin, and a decrease in overall winning percentage – actually had a positive impact on New Zealand’s average winning margin over the course of this cycle in comparison to the 2012-15 period: 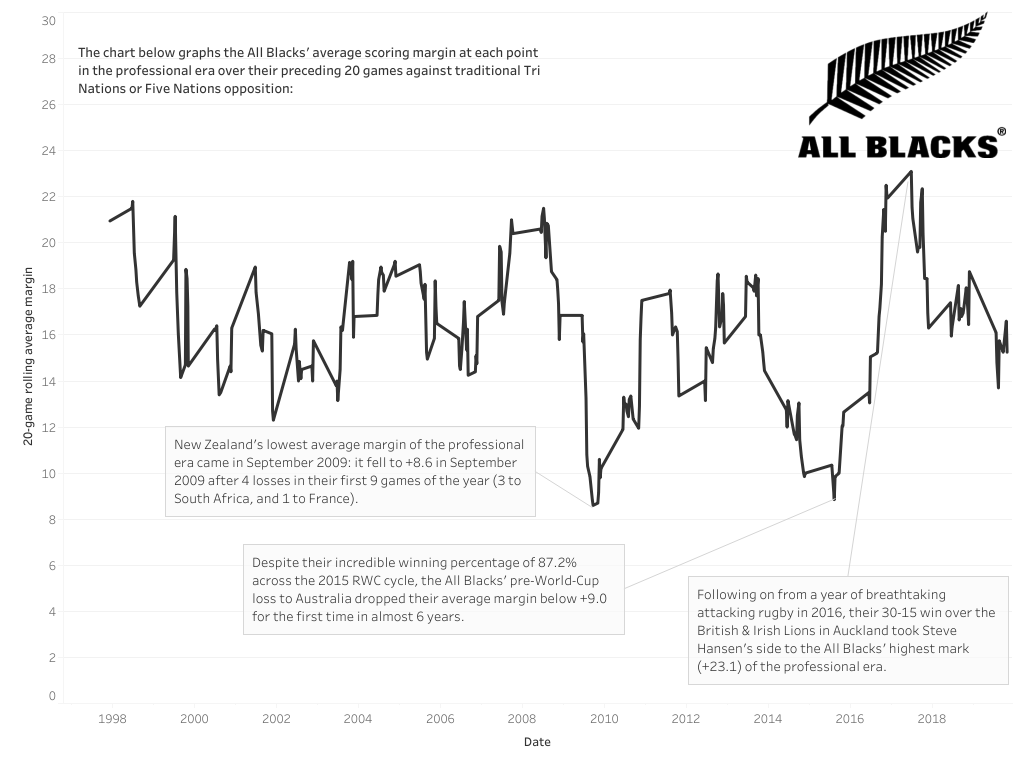 In short, the last four years of Steve Hansen’s tenure as All Blacks head coach have been marked by increased volatility in performance. New Zealand lost their highest percentage of games against their traditional opponents since the first two World Cup cycles of the professional era, but were more likely to win big when they did come out on top; as a pair of fixtures, their stunning quarter-final victory over Ireland and comprehensive semi-final loss to England form a neat summary of this thesis.

Given the storied dominance of the double-world-champion side which came before them, it was always likely that this iteration of the All Blacks would fail to match their standards in terms of simple wins and losses. However, it is simultaneously clear that – both from the data above and from the joyous experience of watching the likes of Savea, Barrett, McKenzie and Ioane in full flight – that this side has been exceptional in ways that no All Blacks team before them has.

One thought on “Stepping back”