Leinster head into Saturday’s European Rugby Champions Cup final with an unbeaten tournament record, and comfortably the best per-game points difference (+14.5) and try difference (+2.0) of all teams in the competition. This average margin of victory dwarfs that of their opponents Racing 92 – who have averaged +4.9 points and +0.8 tries per 80 mins on their way to a 6-2 record – and was achieved despite drawing three very strong opponents in the pool stage. Exeter, Glasgow and Montpellier each top their respective domestic league tables at the end of the 2017-18 regular season, but were defeated home and away by the Irish province; only one of Leinster’s six pool victories (Round 4 at home to Exeter) came by fewer than 7 points.

Saracens and Scarlets – defending Champions Cup and Pro12 champions respectively – were no more successful in their visits to Dublin, and after 11- and 14-point victories at the quarter- and semi-final stages only Racing stand in the way of a perfect season for Leinster in Europe’s premier club competition.

The story of the province’s success this season cannot be told without reference to Ireland’s perfect campaign in the 2018 6 Nations, such is the degree of overlap between the two teams in terms of playing personnel: 14 of Joe Schmidt’s Grand Slam-winning matchday squad at Twickenham were Leinster players, while 17 of Leo Cullen and Stuart Lancaster’s 23 against Scarlets featured during the international tournament in February and March.

In addition, it is clear that there are a number of strategic and technical characteristics which are common to both teams. This is most evident in attack, where Leinster – in a similar manner to Ireland – have drawn heavily on an attritional possession approach designed to keep the ball in play for long periods and grind down the opposition:

Leinster have averaged the fewest metres per carry of any team in this year’s competition, while scoring the most tries per game. It is notable that – as can be observed below – there is no meaningful correlation between the effectiveness of a team’s attack (i.e. their try-scoring) and the efficiency with which they progress the ball with ball in hand:

This is a way in which the club competition is similar to the 6 Nations. Between 2016 and 2018, Ireland scored the most tries per game (3.3 of any nation) despite averaging the joint-lowest average metres per carry (2.8); conversely, France averaged the joint-highest average metres per carry (3.4) while also scoring the fewest tries per game (1.5). This is not true of Super Rugby or the Rugby Championship, where there has been stronger correlation between the two measures over the past few seasons. (Interestingly, it is also not the case in the 2017-18 Pro14: there is a considerably greater degree of correlation between metres per carry and tries per game than in the ERCC.)

Both of these Irish sides are able to be effective not through overwhelming attacking dominance, but because they are accurate in their handling and breakdown work and employ a high-volume, low-risk gameplan. In essence, they control the contact area – ensuring that rucks are sufficiently resourced, using footwork and groundwork to win collisions – and are thus able to dictate the terms on which games are played. One of the clearest indicators of the low-risk approach that has been employed with ball in hand is their strikingly low offload rate – a key marker of Joe Schmidt’s Ireland team, and one which is shared with the other Irish provinces in this year’s Champions Cup:

What is most interesting is that this is clearly a tactical choice, and not down to the players lacking in skill with ball in hand. At key moments throughout the 2017-18 campaign, Leinster have struck clinically to score from behind the opponent’s 22m line with accurate passing and offloading; their tries through Garry Ringrose and Dan Leavy in the quarter-final against Saracens immediately spring to mind as examples of excellent identification and use of space. However, it is hard to look past Luke McGrath’s match-winning score against Exeter, which was created by James Tracy’s catch-pass – executed with more precise footwork and alignment than many international forwards in the Northern Hemisphere can manage – and Leavy’s one-handed flip, as the most impressive example from this season:

Again we can use Ireland’s 6 Nations campaign as a point of comparison: Jonny Sexton’s sumptuous skip pass in the left corner against Wales and Tadhg Furlong’s slight of hand in the lead-up to CJ Stander’s try at Twickenham both displayed a similar level of skill execution. Each side has been able to complement their primary means of attack with enough variety and accuracy to generate an additional one or two try-scoring chances per game, and it is this characteristic – along with the game control their primary strategies exert – which allows them to outperform sides who are more efficient at advancing the ball on a per-carry basis.

It is this young forward core of Furlong, James Ryan and Leavy – who will be 30, 27 and 29 respectively at the 2023 Rugby World Cup – which epitomises the blend of physicality and technical skill that makes the current iterations of Leinster and Ireland special. Leavy is often highlighted for his exceptional defensive work, but his handling and carrying are extremely good too:

Among forwards likely to take the field in Bilbao, Leone Nakarawa is in a league of his own as an offloading threat; however, he has also turned the ball over every 12.5 touches, a considerably higher rate than Leavy (who has conceded 1 turnover on 69 touches).

Leinster’s players across the board are extremely effective at keeping possession and limiting turnovers, as the graph below shows:

This is a crucial aspect of their overall strategy of game control, as they do not hand dangerous opportunities attacking in transition to their opponents. They also deny the opposition regular set-piece platforms through the concession of penalties:

Both of these measures – turnover and penalty concession rates – are hallmarks of Schmidt’s Ireland, and are another clear way in which the approach of each side complements and augments the development of the other.

Without the ball, Leinster have conceded the fewest points per game in the tournament. As highlighted above, their overall game strategy tilts the balance in their defence’s favour by not providing the opposition with chances to attack from the most efficient platforms; however, they have also conceded both the lowest average number of metres per carry and lowest clean break rate of any defence: 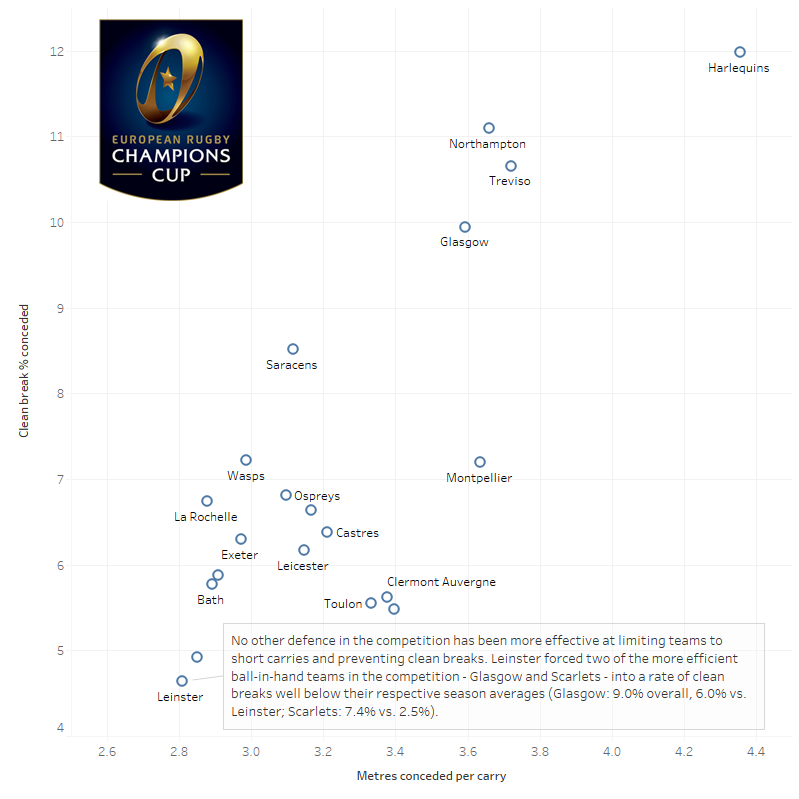 The Scarlets game in particular was a good example of their defensive effectiveness and ability to control contact on both sides of the ball. In limiting Wayne Pivac’s side to 2.6 metres per carry and a clean break rate of 2.5%, they did not attempt to limit their ball movement: the region’s average of 1.45 passes per carry was broadly in line with their 2017-18 ERCC (1.46) and Pro14 (1.44) averages. However, they only managed a single offload from 121 carries in the match, compared to a season average of 6%. This has been a trend for Leinster throughout the competition: opponents have offloaded successfully on only 4.8% of carries, the lowest rate allowed by any ERCC defence this season.

It is more difficult to delve deeper into individual statistics on the defensive side of the ball, but at a team level the overall effect of the physicality and technical accuracy of the likes of Furlong, Ryan and Leavy – alongside Sexton, Henshaw and Ringrose in the backline – is clear. Again, the focus is on achieving superiority by controlling the contact area.

“If you strip it all back in rugby, it’s who hits who the hardest…The game is so much about front-foot ball and momentum. Coming up against a pack that’s dominant, it doesn’t matter what kind of backline you have; if you can’t get ball and any go-forward, what are you going to do?”

Leavy – in his interview with Murray Kinsella on The42.ie this week – does a good job of paraphrasing the old aphorism that ‘forwards decide which team wins a match, and backs decide by how many’. Nevertheless, it is worth considering the degree to which its basic underlying premise – in a collision sport, dominating collisions puts you in a position to dominate the match – holds true in the current iteration of the professional game.

In such a context, the ability in contact of players in these positions undoubtedly take on more importance. While Saturday’s final in Bilbao will also allow both teams to showcase the exceptional attacking talent in their respective backlines – Ringrose and Lowe, Vakatawa and Thomas – in Leinster’s case it is undoubtedly the effectiveness of their forwards that underpins their gameplan.

This tactical approach requires players in these positions to carry and tackle with power more frequently than any other team, but also – as Kinsella notes in relation to Leavy – complete these actions with an exceptionally high level of accuracy and awareness. Without this level of execution from their pack, Leinster – and Ireland – would not be able to control games in such an effective fashion, and it is such a combination of physicality and technical skill which has elevated both sides above their competition during the 2017-18 season.

One thought on “Statistical analysis: Leinster’s path to the Champions Cup final”