Before Connacht’s inspirational run to the Pro12 title this season, the last side to capture the imagination of the Irish rugby public was Joe Schmidt’s Leinster of 2010-13. While Pat Lam will find it tough to equal the three consecutive European trophies achieved by his compatriot in Dublin, his domestic title was founded on similar principles to Schmidt’s success in that period: a superbly executed attacking system, high skill levels and an aversion to kicking away possession. The zenith of this Leinster team was perhaps the run to their first Heineken Cup in the 2010-11 season; after negotiating a difficult pool fairly comfortably, they beat Leicester and Toulouse in the knock-out rounds before a famous comeback victory over Northampton Saints in the final at the Millenium Stadium.

Schmidt maintained some of the key tenets of his gameplan at Leinster on his transition to the role of head coach of the national side – a focus on efficient ruck work and an inventive attacking playbook – while accentuating the importance of other less prominent elements (for instance, the prominence of the kicking game as an attacking weapon). The main difference between the two periods has been in the execution of his gameplan: Ireland have struggled to create opportunities with ball in hand throughout his time as coach, while the defining feature of Leinster in the early 2010s was an incisive and clinical attacking instinct. Some of this is down to his selection policies: there have been certain key choices made by Schmidt which have not helped Ireland’s attacking issues. Jared Payne’s recent performances at full-back in South Africa validated the countless calls for him to play there, and cast Rob Kearney’s seemingly unimpeachable hold on the shirt (which may well have continued into the June series if not for injury) in an even more maddening light. An oft-quoted factor for some of the changes observed between his two tenures is the lack of training time with players at international level – one of the keys to driving high skill levels within a playing group, as Pat Lam and Dave Ellis have shown this season – and this has undoubtedly been important in his transition from province to country. It seems the Kiwi would rather execute a more limited gameplan at a world class level than tolerate the inevitable increase in error rate that would arise from the implementation of a more expansive one, and some of his more contentious selection strategies should be understood in this context.

There can be no arguments over the level of ball skills which Schmidt cultivated among his Leinster squad over his three seasons, during which their passing ability was the envy of Europe. This was the fundamental skill upon which all of their success was founded, and allowed them the confidence to attack space from deep in their own half:

Jonny Sexton at fly-half played a massive part in this aspect of their game – his ability to spot openings on the outside edge, and adjust the angle and timing of his pass in order to deliver the ball to that space, was matched by the hunger and intelligence to track his outside backs upfield and position himself to finish off scores. In the example below from the 2010-11 semi-final vs. Toulouse, his subtle straightening at second receiver forces the final defender to hold and maintains the space for Heaslip to attack on the outside shoulder:

Also notable here is the confidence with which Shane Horgan steps in at first receiver and throws an accurate 1om skip pass. The confidence of each player in the ability of his teammates is essential in such an attacking system; without that trust, the width which underpins the team’s attacking alignment is compromised and it is much more difficult to move the ball to space. Schmidt’s work meant that Leinster had competent ball-players all over the park, and the trust which developed as a result was often rewarded with an offload to create a line-break or a try-scoring pass:

Positive offloading interplay like this between O’Driscoll, O’Brien and Ross has rarely been seen in Ireland’s attack over the last few seasons, likely because Schmidt doesn’t feel comfortable implementing the strategy at a sub-optimal level. In the Leinster environment, all of the required elements were present to a sufficient degree and it was used to good effect. The example above again shows the importance of that trust between team-mates: Mike Ross is already shaping to track Sean O’Brien before the flanker receives the offload from O’Driscoll, and hits the second ball with conviction. In these scenarios where an attacker has already got his body beyond the tackle, much of the risk of the offload has been removed and it is a positive, high-percentage option.

Despite this ability to attack and exploit unstructured situations which he engendered, the most memorable tries of Schmidt’s coaching career are from his classic set plays – complex calls with multiple moving parts aimed at the blind spots of a defensive system. These plays (of which Rob Kearney’s scything weak-side cut is perhaps the most commonly used) are emblematic of the Kiwi’s notorious eye for detail – and, to his detractors, symptomatic of a desire to control and pre-ordain the on-field action. In this Heineken Cup campaign there were a number of different patterns employed, often off set-piece ball. All were based on the principle of misdirection – the defence’s eye is drawn in one direction, before a blue shirt pops up to receive a pass away from the focal point of the attack:

Equally as important as the conviction and accuracy of the running lines in these situations is the awareness of the decision-maker. With the likes of O’Driscoll, D’Arcy, and Nacewa as secondary playmaking options in the backline, Schmidt was able to put intelligent players in position to read the options and exploit if the defence overcommits:

A feature of their attacking strategy in the Toulouse semi-final was the way they attacked the seams between David Skrela (10), Clément Poitrenaud (12) and Florian Fritz (13); on three occasions in the first half, Brian O’Driscoll drifted across the midfield and invited Isa Nacewa to cut back hard into a gap on the inside shoulder of one of the centres. While they were not able to create a clean break via this tactic, it is a good example of the way in which the side would relentlessly target an identified weakness in the opposition:

In Schmidt’s systems the role of dummy runners is to create space through seemingly incidental contact with interior defenders; in the example above, D’Arcy’s attempt is unsuccessful and Skrela is able to cover, but the intention is clear – every player on the field is used to create space for the ball-carrier.

In terms of the general positional structure of this Leinster side in phase attack – and in order to address the comparison to Pat Lam’s Connacht with which this piece began – it is instructive to define what they were not attempting to do in phase play. Attacking sequences in the opposition half were often run primarily off 9, and attempts to move the ball into wider channels were made through the backline. The alignment of the forwards almost exclusively between the two 15m lines did not facilitate the ‘wide-wide’ pattern which Lam has brought to the Sportsground, and in the Toulouse semi-final there were a number of instances where problems arose as a consequence. The image above where Jamie Heaslip is forced to kick the ball away as a result of a lack of support in the 15m channel is a good example of this; the system of Connacht and the New Zealand sides ensures that there is always a second man available in this area to resource a ruck or offer themselves for a pass. Sean O’Brien is faced with a similar problem in the image below, a few phases before the ball is returned to Heaslip on the right touchline: Leinster have created a 1v1 with Maxime Medard for the most damaging carrier in European rugby, and O’Brien gets well over the advantage line. However, the nearest player is a winger (Luke Fitzgerald) and his breakdown work is ineffective; it is three seconds from the point O’Brien goes to ground before the first forward (Kevin McLaughlin – 10m away at the bottom of the image) arrives, and the end result is a five second ruck and a Mike Ross pick-and-go. Later in the second half, Sexton attempts to play wider after a number of tight phases off scrum-half Eoin Reddan; however, there are seven forwards  inside 10 (with six – circled – more than five metres away from play) and only Shane Jennings offering himself as a carrying option to the fly-half: 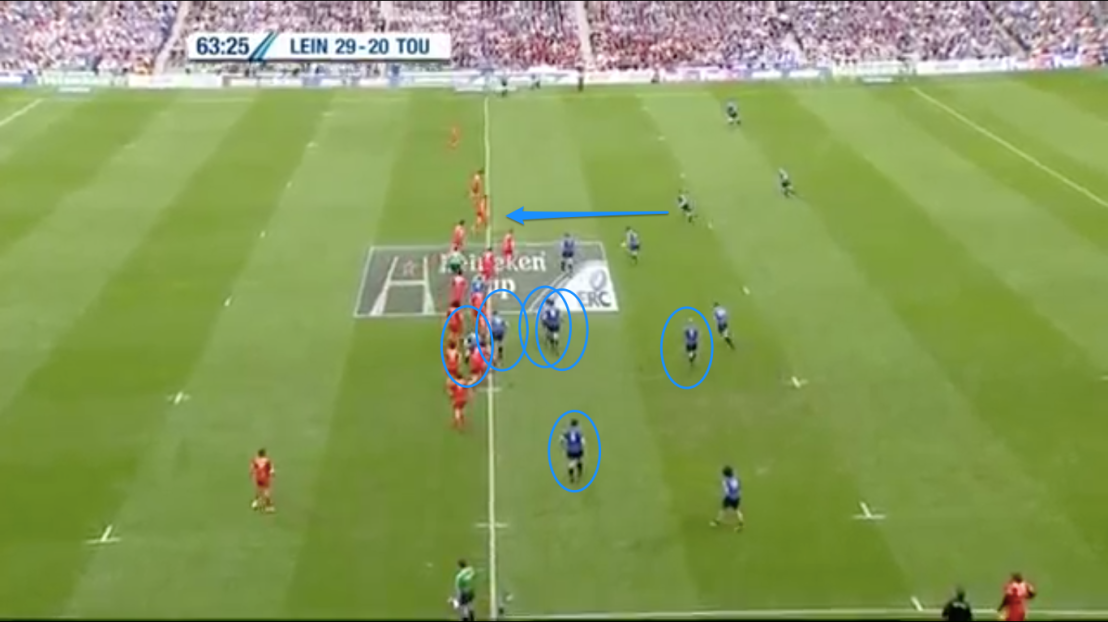 Because of this isolation Louis Picamoles reaches the breakdown before any Leinster player and can disrupt possession unchallenged, resulting in a turnover. This contrasts starkly with Connacht’s ever-present midfield pod of forwards, and emphasises a key difference in their styles: both teams sought to take advantage of opportunities with excellent handling ability, but for Leinster the forwards took on a less prominent role in phase play.

Although deployed in a different fashion in the team’s general attacking structure, their pack was clinical when opportunities emerged. Richardt Strauss finished off an excellent counter-attacking try against Saracens in the group stages with this well-executed pass under pressure:

The identification of space by Horgan and Sexton is immediate, and the finish devastating. Horgan’s presence in this backline was hugely important to their success: as the blindside winger on set-piece ball, he was constantly on hand for a short carry, offload or to hit a ruck, and in the examples we have seen above his skill level and vision are apparent. He and Gordon D’Arcy – whose footwork into contact both with and without the ball was exceptional – provided the platform on which Sexton, O’Driscoll and Nacewa were able to thrive.

As a possible return to New Zealand beckons, it is interesting to consider how a coach who has been maligned – often unfairly – for the attacking style of his team over the past twelve months would manage a transition to a head coaching role in Super Rugby. If he chooses to forgo a second World Cup with Ireland and take a job with either the Chiefs or Highlanders, his approach there will likely have more in common with his years at Leinster than in international rugby. How he would choose to alter his basic alignment in phase play would be fascinating, but it is highly likely that his pragmatic tendencies, keen eye for detail and relentless desire for improvement would ultimately lead to success in his homeland – and a strong candidacy in the race to succeed Steve Hansen with the All Blacks.